Working With Shapes in ArtWorks

WROCC’s August 2008 meeting saw Rick Sterry talking about Xara and drawing parallels to its RISC OS sibling ArtWorks. At first glance, many of the tools demonstrated by Rick are not available to ArtWorks users, although in fact the effects can still be achieved.

Since the Computer Concepts days, ArtWorks has had the Join Shapes entry in the Lines/Shapes menu (or via Ctrl-I). This has the same effect as Xara’s Join tool. 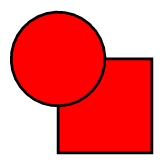 Users of ArtWorks 2 (or those with Martin Würthner’s original Intersect module) will also find the Intersect all (Ctrl-W) and Intersect with top (Ctrl-Shift-W) entries in the same menu. These have similar effects to Xara’s intersect tool.

The other tools require a little more thought, but the effects can all be achieved by using Intersect tools in various ways: the example files supplied with the Intersect module (and ArtWorks 2) demonstrate the different operations in some detail.

Xara’s Add tool can be duplicated by a process referred to as ‘union’ in the tutorials (see the Intersect5 file). To add two shapes, select them and join them (Ctrl-I). Clone the joined shape (Ctrl-K), then select both clones and intersect them (Ctrl-W). Finally, break the intersected shape (Ctrl-L) and two shapes will be left: the intersection (which can be deleted) and the sum or union.

Subtract can be done in a similar way, using a process described as ‘symmetric difference’ in Intersect6. Draw a rectangle over the shapes, so that it completely covers them, then select the lot and join them (Ctrl-I). As before, clone the result (Ctrl-K), select both clones and intersect them (Ctrl-W), then break the result (Ctrl-L). This will result in the original rectangle (which can be deleted) plus the two subtracted shapes. 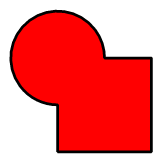 Slicing can be carried out with careful use of cloning, intersection, and subtraction.