An impromptu programme following a last-minute cancellation resulted in three short demonstrations by WROCC members. Steve Bass showed how to add a small volume control circuit to an Iyonix fitted in a Phoebe case, and also proved that it isn’t that hard to upgrade a laptop. Colin Sutton showed us some panoramic photographs and animations of scenes around Bradford with a promise to return later in the year and explain how they were made, and Steve Potts closed the evening by talking about RISC OS 6.

We were expecting R-Comp to be our guests at this meeting, but this has now been rescheduled to the October meeting. Yet again we had to arrange alternative entertainment at short notice, and happily several WROCC members stepped forward to fill the gap.

The first was Steve Bass, who described a little project to fit up/down volume control buttons for the audio system in his brother’s Iyonix that had been relocated into a Phoebe case (the case-transplant itself was the subject of an article by Chris Bass in the November 2007 WROCC newsletter). The reason for using buttons instead of a conventional rotary control, is that they are incorporated into the Phoebe case design.

There is a clever little I.C. chip available which simply replaces the standard potentiometer volume control, though unlike a potentiometer, it does require a low current power source (at +5v). The volume can be stepped up and down by means of two momentary-action switches, or you could use a centre-off biased rocker switch. The volume can also be controlled digitally from a CPU if required, and the chip will actually ‘remember’ the volume setting when power is removed, so it won’t keep resetting to a default. The chip is the DS1669 digital potentiometer made by Dallas Semiconductor. RS Components sell them in 10kΩ, 50kΩ and 100kΩ versions, at about £4 apiece – just search for “DS1669” on their website. They are single-channel, so for stereo you would need two. You can find out more information by Googling for “digital volume control”, but specifically look at www.aaroncake.net/circuits/volume.asp. The circuit diagram here shows how simple these are to use. 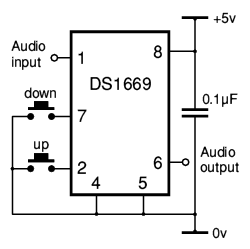 The circuit for the DS1669 volume control I.C.

After that, Steve described how to upgrade the wireless network card in a laptop computer – people in the audience could be seen flinching as Steve pulled off the keyboard, and various internal covers. I can vouch from my own experience that taking laptops apart is not intrinsically difficult, and nor does it demand special skills. The trick is knowing which screws to remove (and sometimes there are an awful lot of them), and which latches to flick aside. A spot of Googling can often find you the necessary information, so it’s well worth a try before you take the bull by the horns. Steve made the point that internally fitted Wi-Fi cards are more robust than their USB or PCMCIA counterparts, and less likely to go ‘walkabout’.

Finally, Steve was able to demonstrate the wireless networking ‘live’, as the sports centre is now a Wi-Fi hotspot thanks to the Bridge Club.

Next on the agenda was a short demonstration on the subject of photographic panoramas by Colin Sutton. He started by asking the audience if anyone had tried creating a panorama, that is, a series of horizontally overlapping digital photographs, ‘stitched’ together by software (of which there is a great deal available). A few heads nodded, including mine. He then asked if the results had been any good, with no obvious joins or distortion. I volunteered that I had successfully used the photo panorama tool in Xara Xtreme 4 to create a panorama of Toulon harbour in the south of France, taken looking down from the mountains above. However, Colin rather took the wind out of my sails by stating that panoramas of seascapes and countryside were relatively easy for software to handle, but what about townscapes, he asked. What happens if you create a panorama taken, say, in a busy city square – how does one cope with the leaning verticals of buildings, fast moving vehicles (part of which might be present in one frame but not the next), slow moving people who might appear in more than one frame, and so forth? Also, do the buildings appear to curve as you pan over the panorama, and are there any mismatches or colour shifts between frames? That got us all thinking!

We were then shown an animated 160° panorama made up of 6 frames, of Centenary Square in Bradford, with accompanying ‘muzak’. By “animated”, I mean that it slowly panned one way, and then back again, and so on ad infinitum, or “ad nauseum” in Colin’s words. The verticals did not lean, there were no visible joins (someone thought they had spotted something, but it was just a ripple in the projector screen), there were no part-vehicles, and no identical twins. There were in fact two similar-looking ladies towards the right-hand end of the panorama, but apparently they really are sisters and not photographic clones.

What was particularly remarkable about this animated, musical panorama was that the file was only 1.3Mb long, yet was high definition 16:9 full-screen. A colleague of Colin’s simply could not believe this, so Colin had to prove it to him by creating a panorama taken from their works car park, and we were also shown this.

The reason that the music did not greatly enlarge the file size was simple enough, and someone in the audience correctly guessed that it was a small amount of MIDI data, which relied on the computer to supply the actual musical ‘voices’. However, the mysteries of why the images did not require a greater file size, and why the animation did not do likewise, were not revealed to us. Colin just asked if we would be interested in a more detailed talk at some later date – what a tease! Everyone nodded, as we were all thoroughly intrigued, so we can look forward to this at a future meeting. Meanwhile, if you have a machine with Windows XP or Vista, and have access to the members’ area of the club website, you can view the Bradford panorama for yourself. Just look in the ‘Meeting resources’ section below.

Well, the meeting was going swimmingly until it was the turn of WROCC stalwart Steve Potts to step forward and talk about the latest build of RISC OS Six. He had originally intended to use our nice new ‘cube’ PC, but unfortunately RISC OS Six is not yet installed on it, so he was to use his own laptop for the demonstration. He only left it alone in a corner for a few minutes, but when he collected it to start his demo, he found that it was displaying the dreaded ‘blue screen of death’. Yes folks, Windows XP had blue-screened, and not for the last time that evening! Many of us had never seen it happen before, but we had to believe the evidence of our eyes. Of course, after a reboot the PC wanted to carry out a Scandisk check, which would have taken quite some time. Steve cancelled this, but then to cut a long story short, snag after snag manifested itself, and the poor lad was getting nowhere. Luckily, he had a CD containing MPEG1 video files which demonstrated the various new features of RISC OS 6.10, so he attempted to play these using Windows Media Player, on our cube and also on Steve Bass’s laptop. All attempts to play the MPEG1 files failed – something to do with not having the right CODECs, or was it? I suggested that there was something ‘dodgy’ about the MPEGs, and that in future we should install the VLC Media Player free open source software on our cube, as this doesn’t usually require additional CODECs and seems to be able to play pretty much anything you can throw at it. Someone else said that the real reason was that “Windows is c**p”, and they may well be right, but Steve didn’t have any more joy trying to run the files under Ubuntu (Linux) on the cube.

Eventually, it was good old RISC OS that triumphed, and at last we were able to watch the demo videos. There was no commentary, other than from Steve himself of course, and the videos did not show which keys were being pressed to achieve some of the results, but Steve was able to explain. So, whilst the outcome was not as good as a proper ‘live’ demo conducted by Steve himself, it was still more than enough to give an interesting look into the improvements and enhancements made to the desktop filer. Among them, but this is by no means an exhaustive list, are:

Faced with all the pitfalls, a lesser man might have cracked, and ended up hunched in a foetal position in the corner. However, Steve is made of sterner stuff and persevered gallantly in the face of adversity, so he received a well deserved loud and long round of applause! It later transpired that the hard drive in Steve’s laptop was failing, hence the misbehaviour.