Originally formed in April 1983 by seventeen BBC Micro owners from the Wakefield area, WROCC celebrated its 25th Anniversary this month. Members brought along a wide range of Acorn and RISC OS hardware – old and new – as well as collections of magazines, books and other curiosities. Mike Cook talked about his own computing experiences, which began with him building his own hardware as a student in the ‘70s and progressed via the Beeb and Archimedes to present day systems such as the Arduino. Joel Rowbottom was on hand to demonstrate a working Domesday System, and those present could tuck in to the buffet and birthday cake during breaks in the proceedings.

Our special guest at the April meeting was Mike Cook, an Honorary Life Member of the club. Mike has visited us many times, but he’s always got something new and interesting to talk about. This time, it was a rather svelter version of Mike that appeared before us – it seems the poor fellow has been banned from eating cake (apart from a piece of our anniversary cake), to avoid a recurrence of angina! He is now back working for Pace in Bradford, so their last parting can’t have been too antagonistic. I am not going to attempt to cover everything he talked about, but I thought I’d pick out the bits that most interested me. 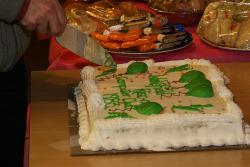 The cake, cut by Mike Cook, proved to be another attraction at the meeting

Partway through his presentation, Mike showed us some video taken at the September 1985 Micro User Show at UMIST in Manchester. What was striking about it, apart from the amusing fashions and haircuts of the day (not that computer ‘anoraks’ or ‘geeks’ are generally noted for their sartorial elegance), was the fact that privately-owned video camcorders were still a novelty, and so almost everyone who came into shot felt compelled to pull a silly face, make a daft noise, or clown around in some manner – most undignified!

He first showed us a couple of pieces of hardware from his distant past. The first was a hinged wooden box, (custom made by his Dad), containing a simple binary adder, made as a CSE project in 1966 when he was a mere lad of 15. You set up the two bytes on switches, and little torch bulbs lit up with the result. He was very pleased with it, but apparently it failed to impress non-techies – I suppose it did lack the ‘wow’ factor. The second was designed and built by him in 1976 when he was a post-graduate student; a single-board microcomputer using a Philips 2650 microprocessor chip. Mike called it a “single-board” computer, because it was all screwed down to one piece of wood! This was programmed byte-by-byte by setting up the address on switches, and then switching from Address mode to Write mode, where the data could be set up via the same switches and written to memory. The address incremented automatically after that, thus reducing the tedium slightly. You could eventually switch to Run mode and run the program in real time, or step by step. It didn’t actually do a great deal, though apparently Mike did manage to get it to play simple tunes on a loudspeaker, display patterns on LEDs, and so forth. However, it was enough to show Mike the potential of microprocessors, and also to teach him that this was most certainly not the way to build microcomputers!

Later that year, Mike designed and built a microprocessor controlled logic system for the GB3MA amateur radio repeater in Manchester – until then, such logic boards were not programmable, but comprised hardware such as TTL or CMOS logic with a fairly high component count. If any changes to the operation were needed, then hardware components had to be changed, or wired differently – not a very flexible arrangement. A repeater is basically what the layman might call a “relay station”, usually located on a suitable hill, mast or high building, and its purpose is to receive signals (usually on VHF or UHF) from low power handheld and mobile stations (be they radio amateurs, police or whatever) on an input frequency (channel), and simultaneously retransmit them on a nearby output frequency (channel), so that they have much greater coverage. The logic has many jobs to do, including sending a Morse ID (a requirement of the licensing authorities), and various tone decoding, timing and switching functions. In order to guard against lockups, Mike incorporated his (then) innovative automatic reset function, now more commonly known as a watchdog timer.

One of the things that most attracted me, and many others, to the BBC Micro was the fact that it positively bristled with external interfaces, including the Analogue (joystick) and the versatile User Port. Interfacing the Beeb to the outside world was huge fun, and was the basis of many of Mike’s Body Building articles in BBC Micro User magazine. Now, Mike has come across an exciting family of little Gizmos called Arduino. Quoting from the website at www.arduino.cc...

“Arduino is an open-source electronics prototyping platform based on flexible, easy-to-use hardware and software. It’s intended for artists, designers, hobbyists, and anyone interested in creating interactive objects or environments. Arduino can sense the environment by receiving input from a variety of sensors and can affect its surroundings by controlling lights, motors, and other actuators. The microcontroller on the board is programmed using the Arduino programming language (based on Wiring) and the Arduino development environment (based on Processing). Arduino projects can be stand-alone or they can communicate with software running on a computer (e.g. Flash, Processing, MaxMSP).”

It’s also worth looking up Arduino on Wikipedia, including the reference to Freeduino. There are quite a few variants, including ones with USB, Serial or Bluetooth interfaces, and there is even one designed to be wearable, i.e. sewn into fabric! You can have all the fun of the Beeb’s interface ports, with the added bonus that the boards, once programmed, can run stand-alone. For a bit of fun, Mike has even connected one to his old solenoid-controlled glockenspiel (a xylophone with metal bars instead of wooden ones) – it was originally driven from a Beeb. 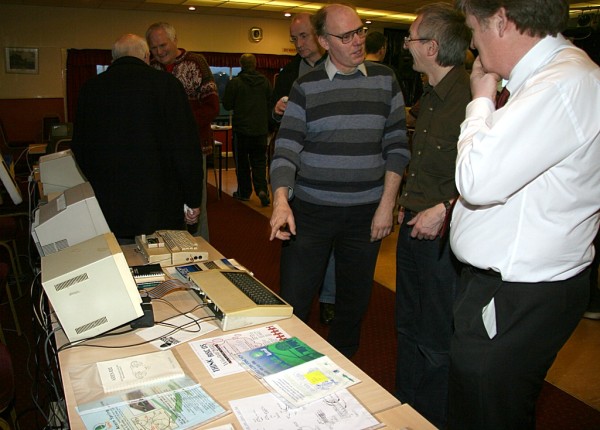 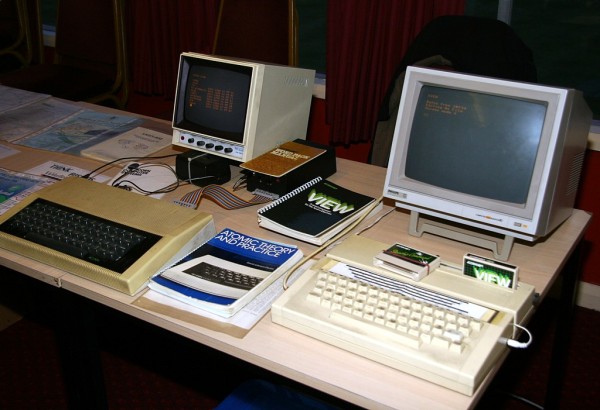 An Atom and Electron, complete with manuals and some ROM cartridges for the Plus 1 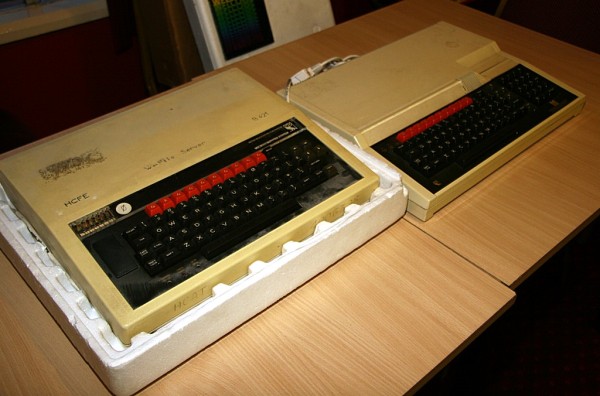 A BBC Micro in its box, with a Master next to it 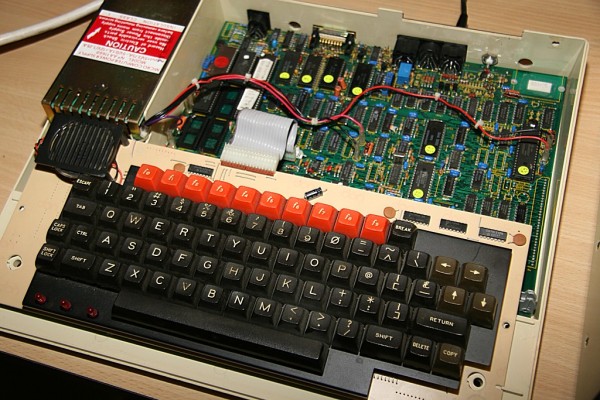 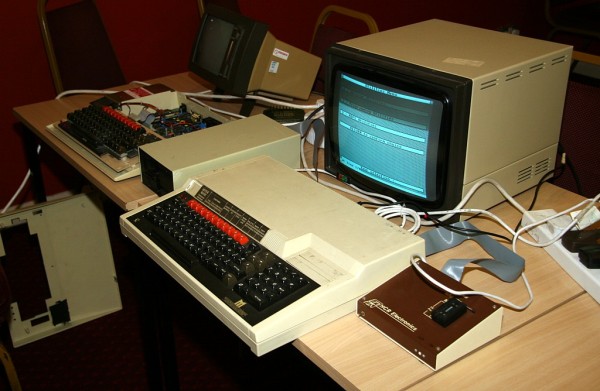 A Master with an EEPROM writer, and a BBC ;Micro attached to some interesting display hardware 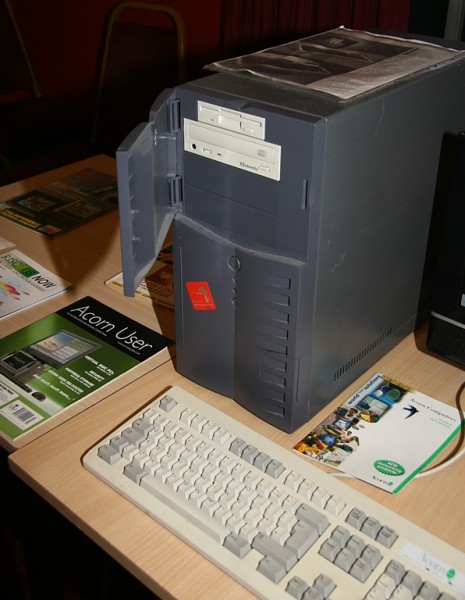 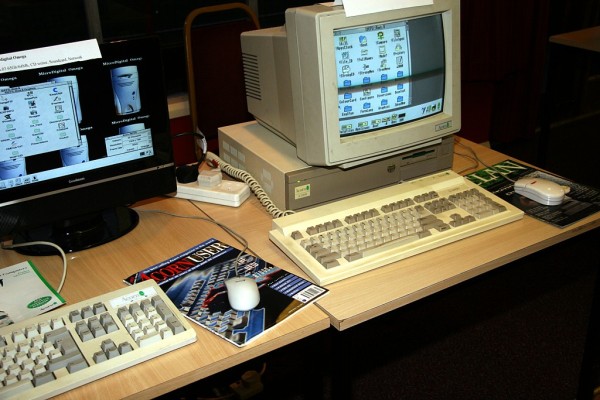 An A5000 complete with an original Acorn monitor 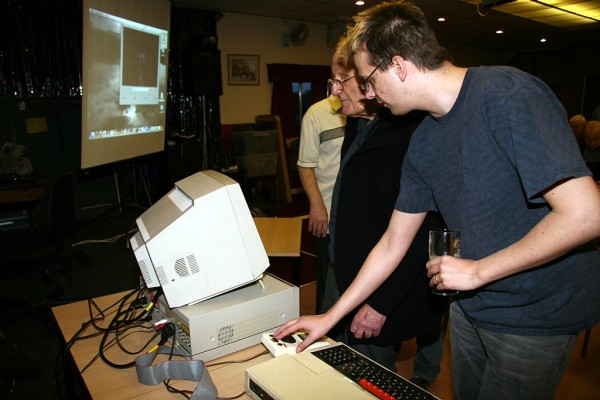 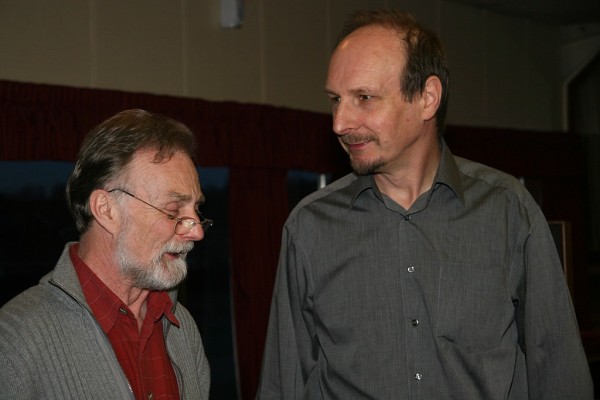 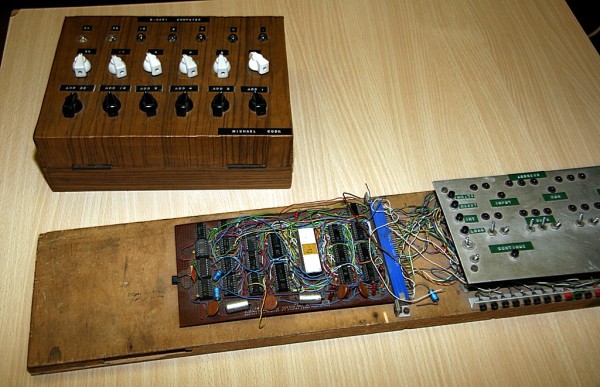 Mike Cook had a couple of props: a binary adder, and his first computer based on a Philips 2650 processor 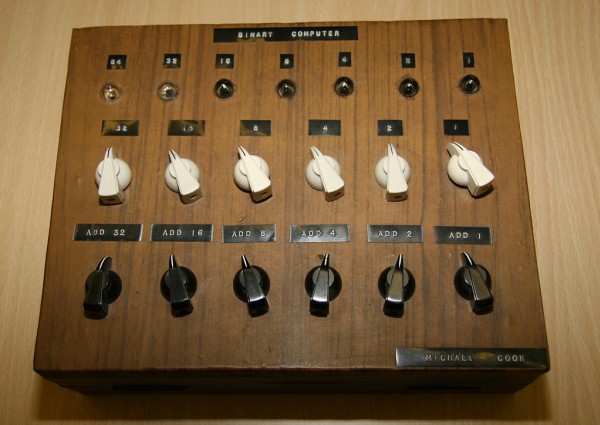 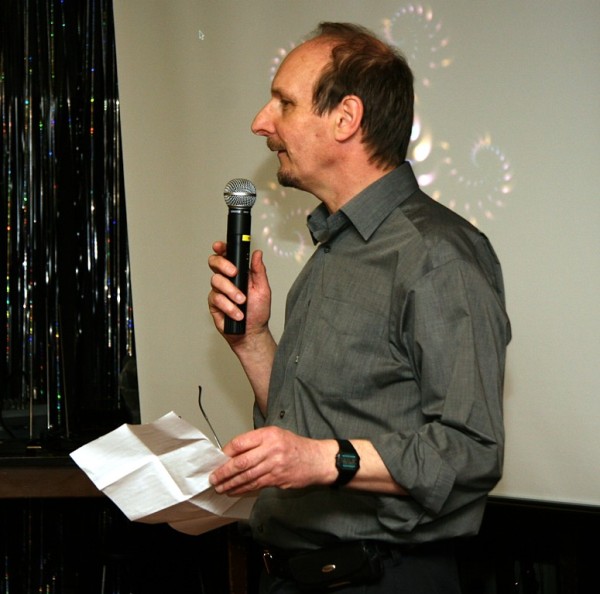 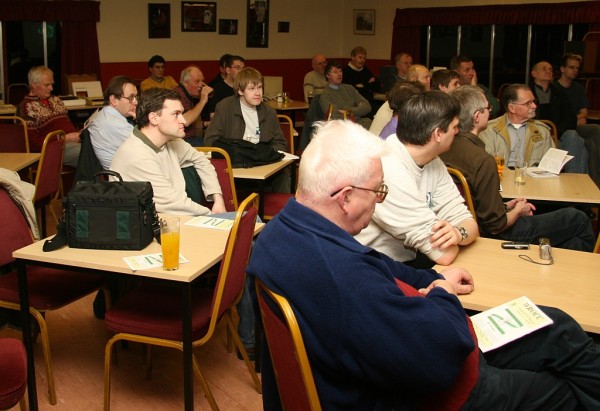 The meeting was very well attended 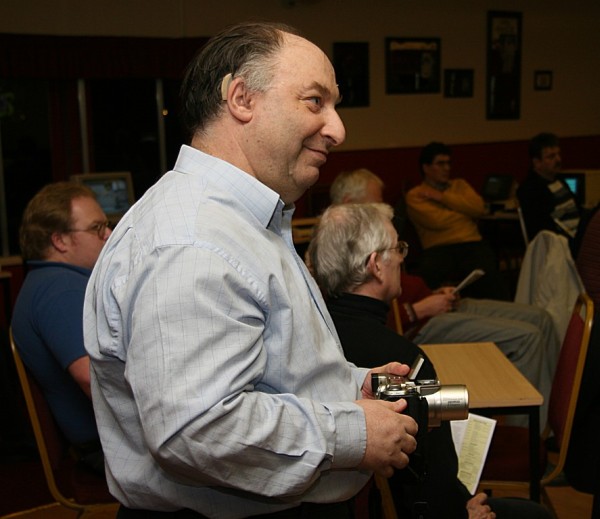 Chris Hughes was also taking photographs during the evening

At least one person reads the newsletter... 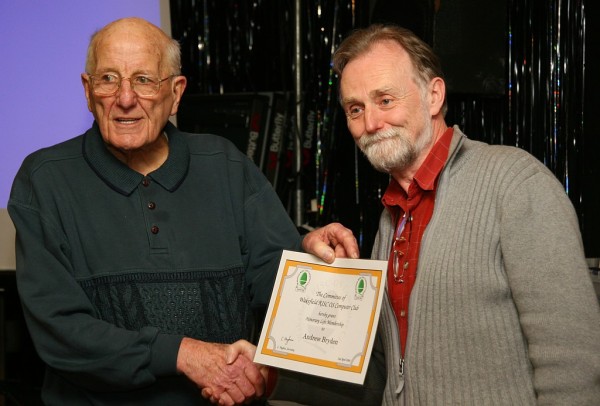 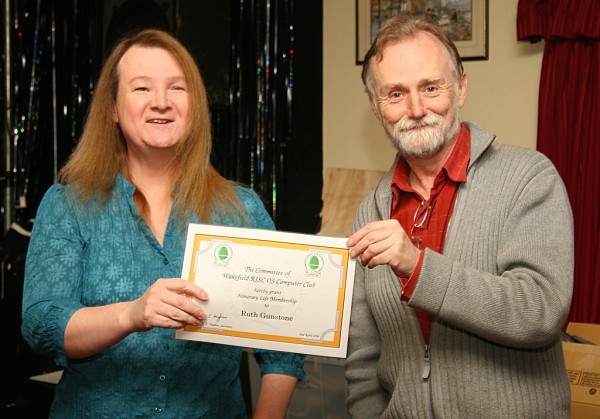 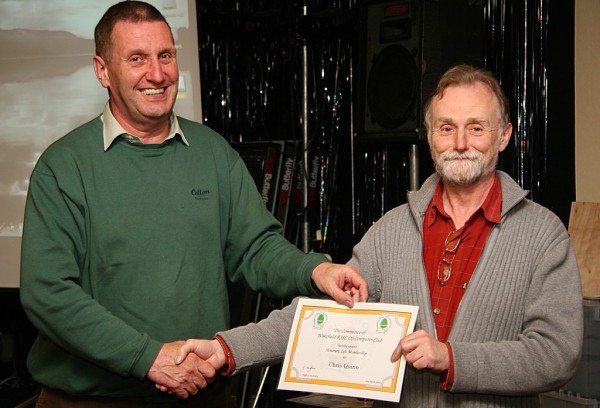 Finally, Chris Quinn receives his life membership certificate a few years after the award itself 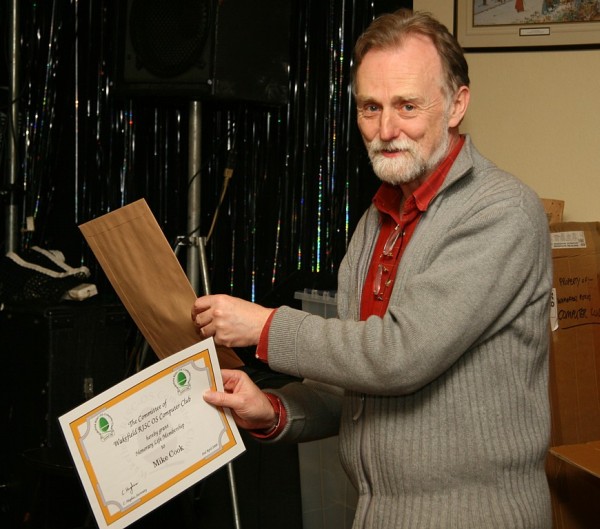 Mike Cook even managed to present a life membership to himself 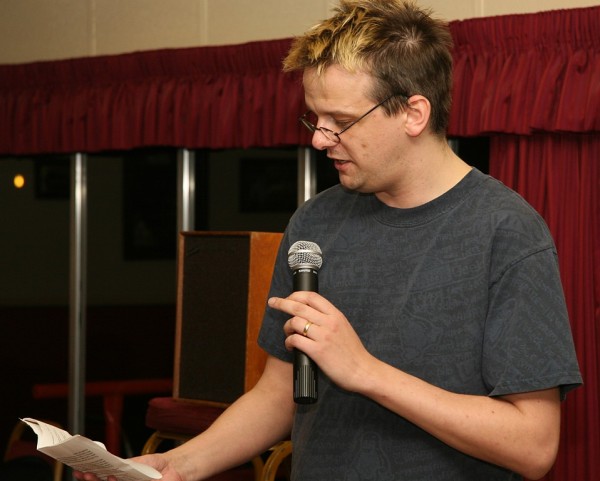 The owner of the Domesday System 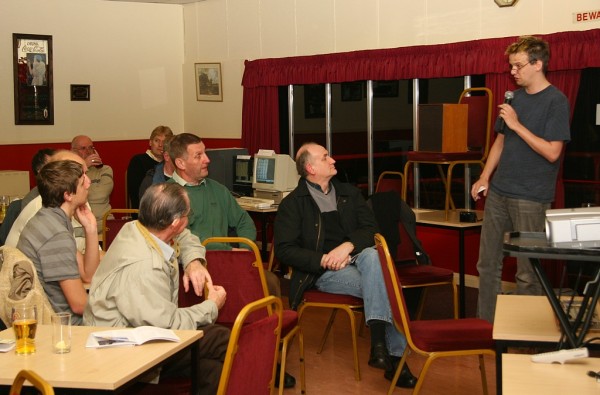 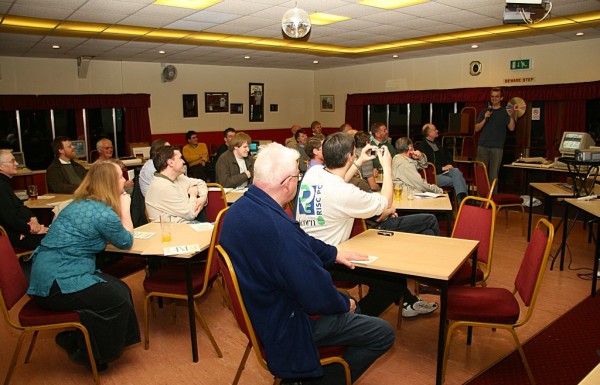 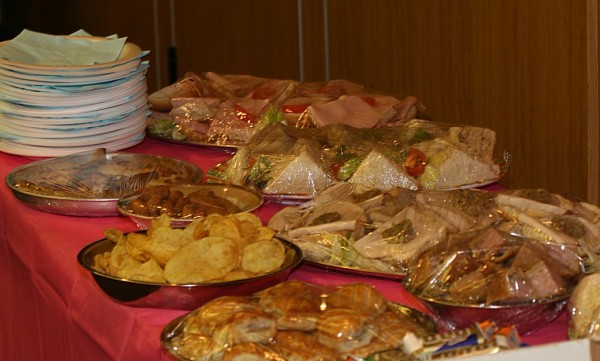 The important bit of the evening 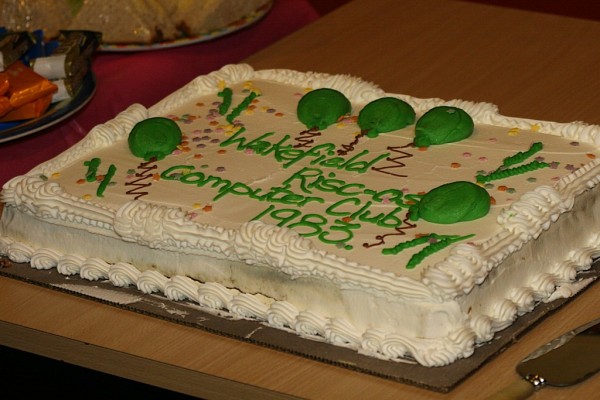 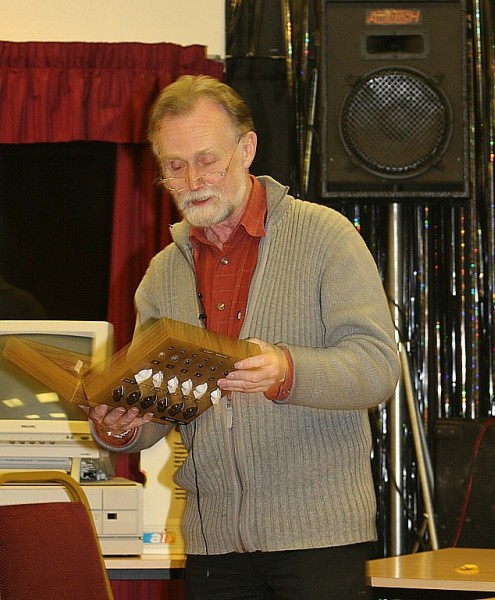