Since his last visit, Mike’s been busy – despite having retired. He used his 2011 talk to bring us up to speed with the various events that he has visited with his electronic gadgets during the year, from Manchester to New York, and to show us videos of some of the things that he and the other exhibitors had been displaying. He also had with him his current ‘work in progress’ – a 3D printer – and the completed and fully-working Hexome.

October’s meeting saw a return visit from Honorary Life Member Mike Cook. He opened by telling us that he had been offered the chance to take early retirement towards the end of 2010, following a reshuffle at work, and had jumped at it. Although now a “man of leisure”, he said that he seemed to have been fairly busy over the past twelve months – not least due to the various travels that he has made with some of his hardware exhibits.

First, however, was an update on the CNC milling machine that Mike had shown us drawing circles on paper at his last visit. By now it was fully working – it had even been used to create some of his recent projects – and although the real thing couldn’t grace us with its presence, there was a video of it milling out an RFID antenna on a piece of copper-clad fibreglass to prove that it really did work.

And with that, on to the projects. The journey started in December, when Mike took his Sneak Thief, Chaotic Pendulum and Hand Activated Remote Player (HARP) creations along to PlaySpace at the Contact Theatre off the Oxford Road in Manchester (as written up by the MadLab team). The day was an opportunity to showcase the use of technology for creative means – dance, performance, games or just fun – and Mike’s creations fell nicely into the latter category.

The Sneak Thief originally appeared back in the days of The Micro User, when Mike created it for the Body Building Course. It consists of a box with a hole in the lid, containing an infra-red sensor and an object to be ‘stolen’. The sensor is arranged in such a way that picking up the object slowly and steadily enough will allow it to be removed; too fast, and an alarm will sound.

More recently, Mike recreated the game with an Arduino, and then improved it by housing the whole thing in a properly-made, polished wooden box. The item to be stolen is an ‘amulet’, and the concept has proved very popular with a post-Beeb audience. Constructional details, and a video of it in action, can be found on Mike’s website.

The HARP was an evolution of the sound square, again something that should be more than a little familiar to Mike’s Acorn-based audience. An array of infra-red LEDs and sensors detect the movement of a hand, and via an Arduino processor send notes to an attached MIDI instrument. Various modes can be programmed in, allowing noises and tunes to be created with ease.

At the event, he met a number of like-minded people from the local area, including the team behind Manchester’s MadLab. Given that Mike hopes to make more of his hobby now that he doesn’t have to fit it in around full-time work, this proved to be a useful part of the day. The exchange of details wasn’t simply one-way: it turned out that MadLab hadn’t heard of the Maker Faire in Newcastle, and Mike encouraged them to attend.

The next date in Mike’s calendar was indeed the Newcastle Maker Faire, held in March as part of the Newcastle ScienceFest. He’s becoming something of an old-hand at this now, having attended every one since the inaugural event back in 2009, and was able to see how quickly things have expanded.

The UK’s Maker Faire is based closely on its US sibling, and is an opportunity for people who are being creative by ‘making things’ to meet up and show off their creations. Those attending range from simple ‘arts and handcrafts’ to some fairly advanced electronics, with all stages in between. The event also has some ‘hands on’ aspects, with those attending being encouraged to pick up a soldering iron for themselves.

Mike took a range of exhibits with him, including the Sneak Thief and an updated HARP which could now play sound samples instead of MIDI notes: the ‘Beat Box HARP’. He also debuted a new project: the dice game from Ian Stewart’s book Cows in the Maze. The twist was that Mike packaged the game up in another wooden box, with an LCD display inset and a real die – using magnets and hall-effect sensors to detect its position when placed in its home on the top of the box. This provided a nice counterpoint to the Sneak Thief – it was serious and strategic, while the latter was the exact opposite.

The event had plenty of other things to see and do: Mike showed us a six minute video, which can be found on his website, containing many things including daleks and robot spiders. There were people doing 3D printing using MakerBots (see Mike’s talk from last year), a number of ‘steampunk’ enthusiasts, musicians rediscovering reel-to-reel tape recorders, and a Twitter-operated drum which made percussive noises whenever anyone tweeted online about the event.

MadLab managed to attend – on Mike’s advice – and brought with them their ‘Project A Sketch’ creation. Based on the familiar Etch A Sketch, this used a large back-projected screen on which a computer traced lines based on input from two dials operated by visitors. The screen could even be cleared by physically shaking it – just like the real thing!

After a visit to our own show in April, Mike went along to Handmade at the Victoria Baths in Manchester: part of the city’s Future Everything festival. Handmade had been conceived to give a platform to maker-style activities, and was attended by a number of local enthusiasts including the now-familiar MadLab (who also wrote it up).

While Mike took along a similar set of exhibits, including his new Harp Player (seen at Wakefield in April), the MadLab team had decided to create something special with a water theme in honour of the venue. What they came up with crossed a theramin with a water fountain, to create an instrument that could be played by holding your hand in a stream of water. It worked using the resistance of body of the ‘musician’ along with the resistance of the water column to act as the input to a Drawdio kit, and appeared to be very effective – if damp – in the video that Mike showed us.

There were other kinds of exhibitors at the event as well: one of the three baths (now empty of water) was in use for a large piece of ‘installation art’ involving speakers and noise creation. On the upper galleries there was a fanzine convention.

A summer of noise

After the Victoria Baths, Mike headed south for Brunel University in Uxbridge, to attend the Beam Festival in June. This was a more ‘serious’ event than the others, with installation art and musicians. Mike was attending under the ‘Beam Bursary’ scheme, covering work exploring music that the organizers considered to be outstanding. One of the events from the weekend that Mike mentioned was a ‘brain-powered sleepover’, where participants created music while they slept! There are some photographs of the festival linked from their website.

Slightly less highbrow was the Full of Noises Festival, which took place in Barrow-in-Furness early in August. Mike had agreed to attend a ‘crazy golf hack’ in Barrow Park, and provided a battery-powered exhibit for the final hole. Not taking itself too seriously, it spun some spiral discs and made irreverent noises when visitors managed to complete the course and then followed with a round of applause when they retrieved their ball from the hole. Most people were surprised at the effect, but left happy – a result!

To round off his year, Mike had taken some of his creations to foreign climes. Having noticed the Open Hardware Summit which was taking place in New York during September, and thinking that his experiences with the Body Building Course, Run the Risc and – of course – his Arduino work might be relevant, he contacted the organizers to see if they would be interested in a talk in exchange for some help with the travel costs. Having heard nothing until just before the event, he was then sent an offer of help with the plane tickets – oh, and he didn’t need to talk about anything, either!

With a piece of convenient timing, it turned out that the New York Maker Faire was taking place a few days later, so in early September Mike boarded a plane for the USA carrying some wooden boxes with electronics in them which caused security at Manchester Airport some consternation. Having convinced them that he wasn’t a terrorist (“If you were going to build a bomb, would you spend ages dovetailing and varnishing a box to put it in?”), he was on his way across the Atlantic.

The summit was interesting, and at the Maker Faire ‘Grumpy Mike’ – as he is known in the online Arduino forums – met up with many people who he had chatted with or helped online over the years. Mike said that he had met Massimo Banzi of the Arduino project, who had been particularly pleased to put a face to his name.

3D printing and the Hexome

With the tales of his travels complete, Mike showed us the almost-complete 3D RepRap printer that he was building. Although nearly to the stage of the milling machine at his last visit, it was currently not working due to some structural issues which required attention.

The other piece of hardware that Mike had brought was working, however: the Hexome which we had seen as a work in progress at his last visit. The meeting closed with Mike showing us what it could do: from sequencing sounds and music in a graphical way to rolling a dice with the press of a button – someone in the audience suggested that it could even be used to re-implement his dice game... 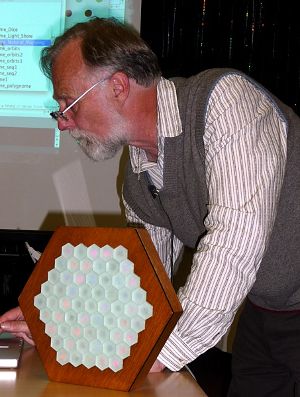