Regular WROCC graphics maestro Richard Ashbery paid us a visit to talk about Artistic Lines, as recently added to ArtWorks 2.X2. Having explained what they are, he proceeded to demonstrate why we might want to use them – creating a set of cartoon graphics in the process.

Our speaker for October was our own Richard Ashbery, once again showing us some of the things that can be done with ArtWorks 2. This time, he devoted the evening to a new ArtWorks feature that was released at the Wakefield Show in April of this year – ‘Artistic Lines’. An artistic line is a line with an outer profile (i.e. varying width) and there are twenty-one profiles to choose from, three of which are ‘constant’ profiles with butt (square), triangular (mitre) or round ends respectively. Bearing in mind Martin Würthner’s usual exhibition dress, one of the profiles is appropriately called ‘bow tie’. The three constant profiles may at first seem unnecessary, as these are covered by the standard line drawing features. However, these are lines, Jim, but not as we know them. They behave much more like shapes, and as such can have coloured outlines and fills, including graduated ones.

Artistic lines can be drawn directly with the freehand tool, but the result (like any freehand line) tends to have so many control points in it that subsequent editing can be rather daunting. Reducing the ‘Accuracy’ setting within ArtWorks down to zero, and slowing the mouse speed down within RISC OS can help, but only to a degree – Richard commented that a drawing tablet might be much better for this purpose. Instead, you can draw ‘normal’ lines, straight or curved, and then turn them into an artistic line simply by applying a profile with the freehand tool.

If subsequent editing is required, then you can edit the line’s control points in the usual way. Shapes formed from artistic lines can not be filled: instead the fill colour is applied to the ‘body’ of the line, with the line colour applied to its outline (similarly line width applies to the outline, and there is a new width field in the freehand info bar to set the overall width of an artistic line). A few editing options don’t work, as detailed in the manual.

If the drawing is rendered in an earlier version of ArtWorks 2 or AWRender (used by software like Ovation Pro or Impression), then – perhaps surprisingly – the lines are displayed as intended but can not be edited. When exported to drawfile, PDF or ArtWorks EPS file (for import into Xara), then artistic lines are converted in to editable shapes (with outlines, fills and transparency as appropriate) – obviously without the ability to be edited as normal lines. (Draw can not handle graduated fills or transparency, although the former is reproduced using many small shapes to fill the required area.) Artistic lines can also be converted into shapes within ArtWorks itself using the Make Shapes option.

Some profiles are stretched along the entire length of the artistic line, Propeller and Bow Tie for example, whereas some such as Ripple and Wave have repeating patterns the frequency of which depends on the width setting. An important thing to note is that an artistic profile can only be applied to a line with free ends, and not to a closed path which would then form a filled shape in its own right (although it seems that they can subsequently be closed, but not filled).

Richard demonstrated the basics of artistic lines, using a simple sinewave. He then explained that the application he had been working on was that of making cartoons look more hand-drawn – a ‘calligraphic’ effect if you like. He created a very simple outline drawing of a fish, using a number of separate lines that appeared to be joined but weren’t quite, so as to avoid creating any closed paths and to enable each line to have a profile. He then showed how converting them into artistic lines with, say, a propeller profile, gave the drawing a more pleasing cartoon-like appearance – the lines were thinner at the ends than the middle.

Richard then went on to demonstrate this technique with a more complex drawing of an elephant. He started off with a simple line drawing that he had scanned in as a bitmap from a book of templates. He then drew his own series of lines over the template on a separate layer for the different body parts, legs, head, ears and so forth, some as shapes some just as lines. When the shapes were filled and artistic line profiles applied to the remaining lines, it made the cartoon more natural looking. 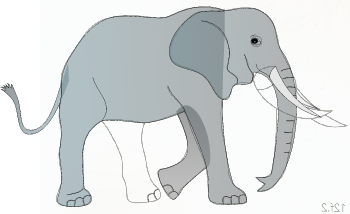 Compare the two illustrations showing the same elephant with and without line profiles. Note how the two left legs have been given a graduated fill, darkening towards the top, to represent the shadow cast on their inner surfaces by the animal’s body above. In the artistic lined version, this involved cloning each leg, one version of which was a closed path with the graduated fill, whilst the other was a line (i.e. without the ends joined) with an artistic profile applied. When the latter was overlaid on the former, the result was the graduated fill within the leg with the artistic profile forming the outline instead of just a simple fixed width line. Finally, the legs were placed behind the body, to hide their tops. Incidentally, the original elephant template did not have a tail, so Richard had to add one, which is why it appears slightly longer than perhaps it should – it does looks rather jaunty though, don’t you think? 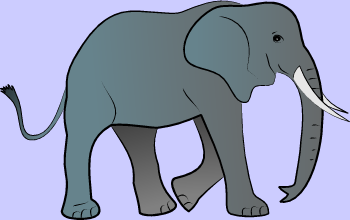 In order to appreciate the difference between the two elephant drawings on the next page, they are best viewed in the PDF version of the newsletter at a suitable zoom level – I doubt that the printed version will do them full justice. 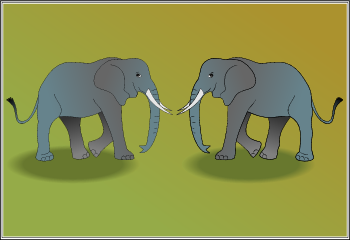 More examples of Richard’s efforts with artistic lines can be found by visiting his web site at homepages.nildram.co.uk/~riscos and clicking on the ‘Thumbnails 12’ link some way down the page. The freeware application that Richard makes much use of to generate various regular line shapes, including the sinewave used in the early part of his demonstration, is DrawLots by Rosemary Miskin. This has been featured at previous meetings, and can be found under the ‘Draw’ category at miskin.orpheusweb.co.uk.

Finally, you can gain a brief overview of Artistic Lines on Martin Würthner’s site at www.mw-software.com – look for ‘New features in ArtWorks 2.X2’. If you already have a copy of 2.X2, then the updated manual explains the features and ‘oddities’ clearly and in plenty of detail.