Richard Ashbery showed us more clever things you can do with ArtWorks 2: in this case how to produce seamless tiled backgrounds from ‘swatches’ as opposed to tessellations.

Our speaker for September was WROCC member and graphic artist Richard Ashbery, using ArtWorks 2 to create Pattern Swatches. The term ‘swatch’ has typically referred to a book of fabric, wallpaper or paint samples. However, it is now also being used for seamlessly repeating patterns (which could of course be used on fabrics and wallpaper). Richard has previously talked to us about the rather special repeating patterns known as tessellation, in which shapes interlock without any gaps. Pattern swatches are somewhat different, in that although they repeat seamlessly, there can be gaps between objects. One way of looking at it is that tessellation interlocks, whereas swatches interconnect. 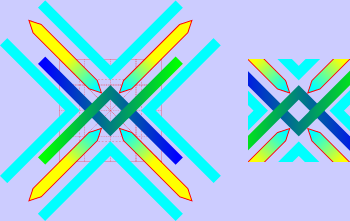 Richard’s first example was of a group of geometric objects, which can be seen above. That single ‘block’ could in itself have been repeated to form a pattern, but not a seamless one as each block wouldn’t actually interconnect with the next. Instead Richard used the Clipview tool to trim it down to a neat overall square shape. He then selected and cloned the new block and abutted it to the original, repeating this process until a seamless pattern was created. 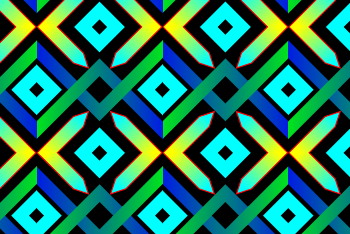 Initially, it had a default white background, but then its appearance was transformed by changing the background colour to black – the result can be seen above. 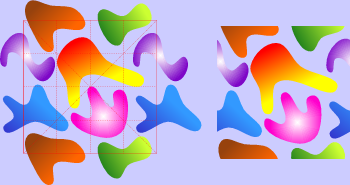 The second example used non-geometric shapes (amoeba-like blobs with graduated colour fills), and the starting point can be seen above. Again, Clipview was used, in such a way that the bisected objects at the edges joined up when the block was repeatedly cloned and abutted. After applying a black background, the rather unusual end result can be seen here. 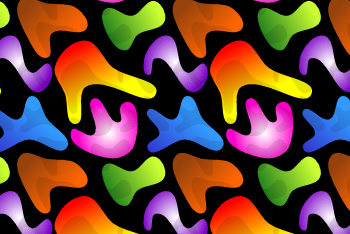 This is perhaps a better example than the geometric one, as you really can’t see the joins – someone in the audience said it looked like “melted jelly babies”!

Many examples of swatches can be found in a book entitled “Drip.Dot.Swirl” by Von Glitschka (ISBN 978-1-60061-134-6), which Richard recommends. It costs £20.36 from Amazon, and on the web site you can preview some of the patterns by following the ‘Click to look inside’ link. It is a roughly A4-sized book, and comes with a DVD containing examples of swatches in Adobe Illustrator .eps format, which can be imported into a good many other packages, including Xara (the Windows cousin of AW). However, according to Richard the import filters on AW really struggle with them and can actually crash the program. Adobe Illustrator itself has a dedicated tool for creating repeating patterns, as opposed to the manual cloning and positioning necessary in ArtWorks and Xara, but then it does cost considerably more! Richard finished by making the point that, rather than merely copying existing examples, you actually learn a lot more by creating your own original patterns. If your budget doesn’t run to £20, there are plenty of free swatch pattern downloads to be found on the web.

Finally, Richard went off topic to show a somewhat disconcerting image (Figure 7). It is formed by having two layers of identical concentric rings, but with the colours in the top layer inverted relative to those in the lower one – black becomes white and vice-versa. The triangle is a clipped view of the rings in the upper layer, with those in the lower layer showing through outside the bounds of the triangle. Richard found two different ways of producing this object, but both use the triangular shape as a clipping path. His explanation follows... 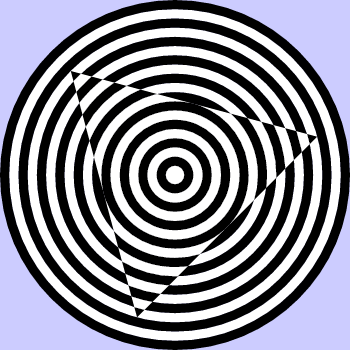 “Ensure the highest quality mode is selected. In both cases set the shape’s fill and line colour to None, and the shape now becomes invisible apart from three control points. Copy it to the clipboard with Ctrl-C – it is important to ensure that the shape remains selected. Clipview method: Adjust-click on the concentric rings and perform Clipview (Ctrl-Shift-K). The problem with this method is the appearance of the dreaded ‘jaggies’ on diagonals, for some unknown reason. Intersect-with-top method: Adjust-click on the concentric rings and perform Intersect-with-Top (Ctrl-Shift-W). This is an excellent method resulting in a smoother effect without any jaggies, but it isn’t as versatile as Clipview generally”.

Clipview is also available in Xara and doesn’t appear to produce the jaggies that Richard encountered in AW. The equivalent of Intersect-with-Top in Xara is Arrange – Combine-Shapes – Intersect-Shapes. I also found that a similar effect can be achieved with Arrange – Combine-Shapes – Slice-(cut)-Shapes, except that the triangle becomes a hole through which the lower rings show – there is no equivalent in AW.

It’s worth making the wider point that although Richard was using ArtWorks to produce swatches, similar results can be achieved with pretty much any capable vector art package regardless of platform. Obviously, such refinements as Clipview are not available in Draw nor in any of its add-ons or derivatives as far as I know, but nonetheless with some effort and within limitations it should still be possible to produce satisfying swatches.

You can see some examples of swatch patterns on Richard’s web site at artworks.riscos.org.uk – click on Thumbnails 13.