Richard Ashbery returned for another look at ArtWorks – this time showing us how the vector graphics system can be used to create simple animations. After explaining the basic concepts, we were shown how to use the software to create a series of animation frames with the help of its multi-page facility. These were then exported as sprites, before being linked together as an animated sequence using InterGIF – after which, Richard showed us a number of detailed animations that he had created earlier.

August saw the welcome return of one of our slightly more distant members, with Richard Ashbery travelling up from Nottinghamshire to talk to us about ArtWorks 2. The last time he looked at the subject was in 2008, when we spent an evening learning about tessellation ; this time, the subject was to be ‘ArtWorks Animation’.

Richard started by taking a general look at the subject of animation and outlining the process behind creating something like a cartoon or animated film. For anyone brought up on the likes of Shrek or Toy Story, it can be hard to remember that before the days of Computer Generated Imagery (or CGI) such things were laboriously drawn frame by frame. To demonstrate the process, Richard had brought along a flick-book, and this was passed around for members of the audience to play with.

RISC OS hasn’t been without real animation software, of course – Iota’s Complete Animator used to be a popular package back in the days of Acorn, although it no longer worked on Richard’s system. Despite this problem, however, he still recommended the manual as an excellent introduction to the subject.

So without access to dedicated animation software, can RISC OS users do anything in the field of animation? Well, yes: it just means a return to ‘old fashioned’ methods.

With the help of the recently-added multi-page facility, ArtWorks 2 is capable of producing a sequence of frames in an animation. Each frame uses a separate page, and the ability to quickly copy the contents of one page on to another simplifies the process. Richard did note that he uses Button Bar – from David Llewellyn-Jones – to give ArtWorks a toolbar, and that it isn’t possible (yet) to put a ‘duplicate page’ button on to this.

To demonstrate the process, Richard created a simple animation of a spinning hourglass shape. Containing 24 frames (on 24 pages of the ArtWorks document), each had the shape rotated 15° from the previous one. Once complete – and after recovering from a slip of the keyboard that demonstrated why saving work regularly is so important – Richard used ArtWorks’ bitmap export tool to create 24 sprites: one of each frame. An invisible rectangle around the hourglass on each page ensured that ‘export selection’ resulted in consistantly-sized images. 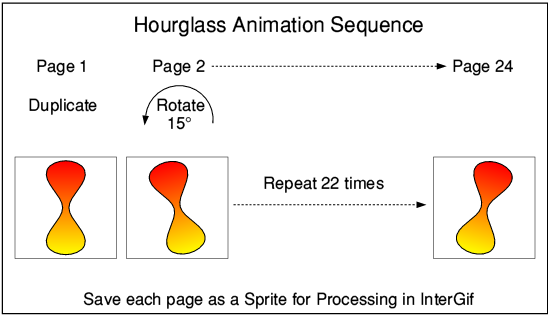 With the individual frames exported, Richard used InterGif to link them into a single animated GIF image. Once complete, IGViewer allowed the sequence to be shown in its full animated glory.

Having demonstrated the techniques, Richard went on to show us a number of animations that he had created earlier: these varied from simple spinning objects to more hourglasses, flying blocks and a flickering candle that was extremely impressive to watch. Some of the animations were produced using graphics from Martin Bazley’s Cogs – a piece of software that Richard described back in March (issue 27.12).

With the basics of animation covered, Richard digressed to look at a neat trick to create an apparently ‘impossible sequence’ in ArtWorks. A circle of coloured discs (as seen in figure 2 below) is a natural enough concept – but is actually very difficult to achieve in a vector graphics package. As the objects all exist on a single ‘level’ in the drawing, the red disc (disc 1) can’t be both above and below its neighbours at the same time: this results in the problem shown in figure 1.

The solution involves the use of the ClipView tool – which is another of Martin Würthner’s additions to the graphics package. Richard walked us through the process during his talk, and the method is explained in the diagram on this page. It effectively copies enough of the red disc to cover its yellow neighbour (disc 5) when brought to the top of the stack, producing an optical illusion. 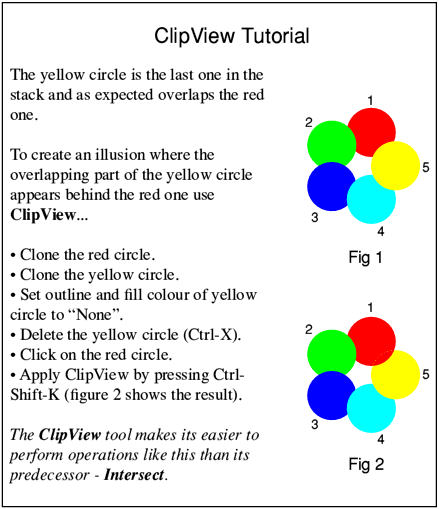 The evening concluded with Richard mentioning the small hand-held device that he had been using earlier to step through his OHP slides. The Kensington Wireless Presenter consists of a small hand-held transmitter which communicates with a USB ‘dongle’ attached to the computer. To Richard’s surprise, it had worked fine with the Iyonix, and the OHP developer had released an update so that the two could work together on RISC OS.